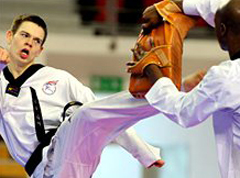 The actual dates for the event have yet to be confirmed but it will take place about 12 weeks before the 2012 Games.

Jeremy Beard, chairman of Sport Taekwondo UK said: “This is fantastic news for taekwondo fans across the UK. It provides us with a real chance to showcase the sport at a time when excitement will be growing ahead of the Olympics.”

Aaron Cook, a current European champion and world number one in his weight category, said: “Having the event in Manchester gives the British team a great chance to get valuable experience and to win medals on home soil. To win a gold in front of our own fans would be amazing and I know that the British team will go all out to put on a great show.”

The London 2012 Olympics run from 25 July to 12 August, with the taekwondo competition beginning on 28 July.