Master Henk Meijer 6thdan of Holland, a legendary coach in Europe in the field of Olympic sparring. Former National Coach of Holland and France and currently National Head coach for Greece. Meijer was the first non Korean who won a World Championship in Korea (1985, Seoul). Meijer was coaching on the Olympic Games of Sydney 2000 and Athens 2004.

Master Nuno Damaso 6thdan from Switzerland. A Taekwondo specialist in many fields incl. sparring, Poomsae and self defense.

The seminar in Luxembourg is limited till only 90 participants and every year the organization has to struggle to select the participants as the interest is far more than double. 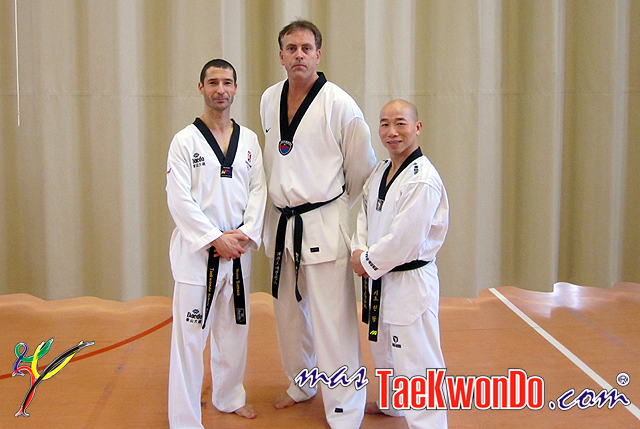 Grandmaster Ky Tu Dang focused on Poomsae competition, its judging, training and development. He was recently appointed by WTF as Technical Supervisor at the World Championships Poomsae in Uzbekistan in 2010.

Henk Meijer informed and trained the participants in the field of Olympic sparring. He focused on the use of the electronic body protectors in competition and the new WTF scoring system and its results for training, strategy, technique and physical preparation.

Meijer is a very respected and experienced coach in Olympic sparring and famous for his dynamic teaching. He had to offer a lot of information to the participants in Luxembourg.

Master Nuno Damaso focused on the camp on traditional Taekwondo and self defense in which he used also techniques of other Martial Arts. Participants were amazed and pleased, about his explosiveness and humoristic way of teaching.

Next year January the 16th edition of the International Winter camp in Luxembourg.