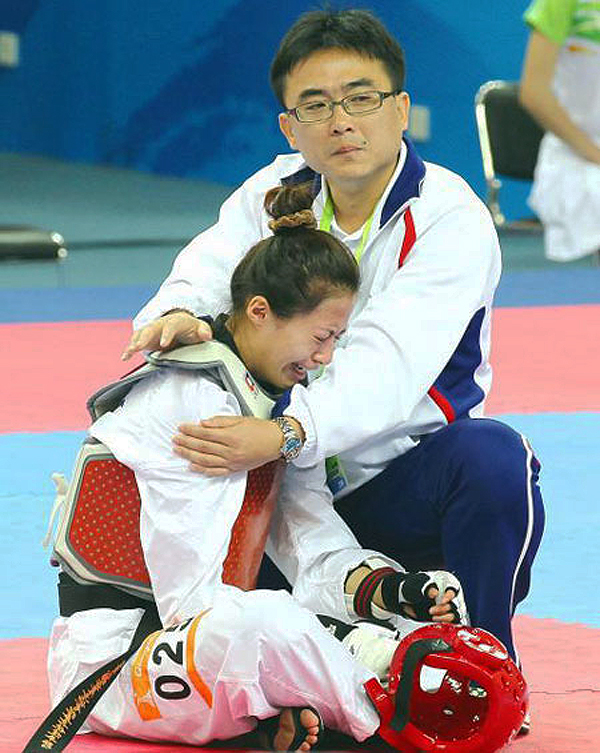 The sensors detect when competitors score points by landing kicks and punches on their opponent’s body.

Yang Shu-chun had been one of the favourites for the gold medal and says she is innocent. A Taiwan official said her disqualification was “unfair”.

“The technical committee did not allow Taiwan’s team a chance to explain before making the decision and we regret the unfair ruling,” said the Sports Affairs Council.

The use of such sensors in the fighters’ socks was introduced to make judging more transparent.

Yang Shu-chun was leading by 9-0 against her Vietnamese opponent Thi Hau Vu, when the match was halted.

The fight was for a place in the quarter-finals of the under 49kg (108lb) division.

Ms Yang and her coach protested her innocence and both refused to leave the competition area.

Taiwan officials said the equipment had been previously approved.

“The footwear passed the original pre-match checks but during the match, when she was leading 9-0, the officials decided the footwear was unacceptable,” said Taiwan team official Tang Hui-ting.

“This kind of footwear is made by a major company and we have used it before in competition,” she said.

The World Taekwondo Federation defended its decision, saying the extra sensors had been removed from Ms Yang’s socks before the match, but had been fixed back on.

It is the first major judging controversy at the Asian Games, which is taking place in the southern Chinese city of Guangzhou.