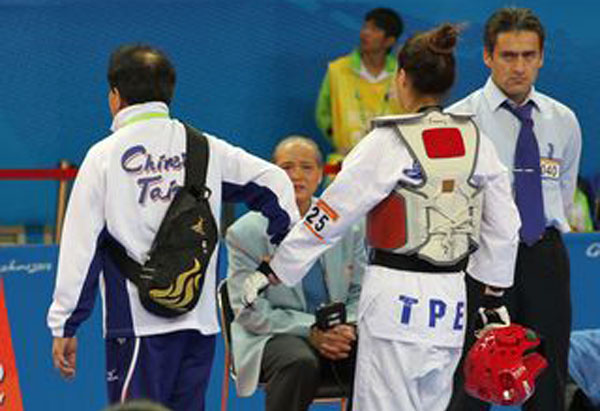 According to Chen, the ATU officials stressed to him that the controversial Nov. 18 posting titled “Shocking Act of Deception by Chinese Taipei” had been removed from the union’s official website.

The ATU apology came a day after Taiwan’s government issued a statement demanding an apology from the organization for its improper “cheating” allegation against the country and the controversial disqualification of Yang Shu-chun from the women’s under 49 kilogram taekwondo competition.

Yang, one of the favorites for gold in the division, was disqualified from an opening round bout against a Vietnamese opponent on Wednesday for allegedly attaching extra sensors to her electronic socks to score more points.

At that point, with 12 seconds left in the first round of the bout, Yang was ahead 9-0.

The decision was strongly disputed by Taiwan, designated as “Chinese Taipei” in the Asian Games and all other major international sports events.

The Chinese Taipei Olympic Committee appealed to the Olympic Council of Asia (OCA) Friday to investigate the controversy. It presented videotapes and other evidence to disprove ATU officials’ accusations against Yang.

OCA officials met on Saturday with ATU officials and others who were part of the technical committee monitoring the Asian Games taekwondo competition to gather information about the dispute.

ATU President Lee Dai-soon of South Korea said at a post-meeting news conference that the probe was still ongoing and that no formal results were available yet.

In his first public statement since the dispute, Lee expressed regret over the occurrence of such an unpleasant incident.

On the contentious article on the ATU’s website, Lee claimed that he was not aware of its existence and declined to answer any other questions about it.

He also said he would not comment any further on the issue until a probe into the disqualification row was completed and the results unveiled.

On Saturday afternoon, ATU officials, including its Thai vice president and Iranian deputy secretary-general and a representative of the Lebanon Taekwondo Association, held a closed-door meeting with Chen, Yang and Liu Ching-wen, chief coach of the Taiwanese taekwondo team.

Chen said after the meeting that the ATU officials asked them about details related to the incident.

The case has been transferred to the World Taekwondo Federation’s (WTF) discipline committee, Chen said.

“The ATU’s Thai vice president told us that he will come up with a report based on our statements, which will be presented to the world federation”, Chen said, adding that the ATU will also present a report about the incident to the WTF.