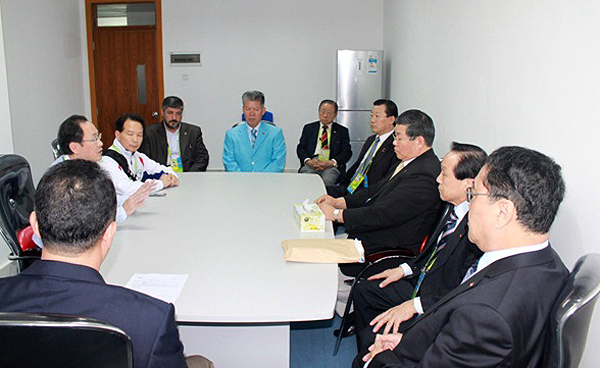 The first day of the Taekwondo Championship at the 16th Asian Games started with a storm that had the capabilities of turning into a hurricane but fortunately was defused with a timely and prudent intervention of the taekwondo officials and the championship was able to weather the storm and pass through it safely.

Match No. 2108 in the Under 49 Kgs in the Female division had YANG Shu Chun from Chinese Taipei playing against VUThi Hau from Vietnam.

The match started with everything seemingly as normal as it should in the first 45 seconds of the first round until the engineer from Manufacturer of the Protective Scoring System (PSS), LaJust, saw something unusual about the way the Chinese Taipei player was scoring and the look of her socks.

At this point he asked the center referee to stop the match to check the special socks that are worn by all the players when using the electronic system.

As requested by the engineer, the referee stopped the match to check the player’s socks when he noticed that the Chinese Taipei player had illegally added 2 extra sensors to the heal of her socks.

As stipulated in the WTF Competition Rules & Regulations he was obliged to stop the match and declare the player from the Chinese Taipei as the loser by “illegal manipulation of the PSS System”.

This brought on a fierce protest by the Chinese Taipei coaches and head of the team who were claiming they were innocent and the player refused to leave the court while the Chinese Taipei team representatives filed an official protest with the Competition Supervisory Board (CSB).

Therefore the WTF Technical Delegate from China and the CSB members from Iran, Singapore, Philippines and Korea along with ATU President, WTF Secretary General, ATU Secretary General and the Chairman of the Referee Committee as observers then quickly held a meeting to make an evaluation of the evidence and the protest.

After a lengthy review and assessment of the evidence and talking with the LaJust engineer, the center referee in the match and receiving their signed affidavit of the incident the illegal act committed by the Chinese Taipei they gave a chance to the President of the Chinese Taipei Taekwondo Associations and Head of the Team to present their side of this reprehensible episode of manipulation of the Rules & Regulations.

After listening to the Chinese Taipei officials and taking into consideration that this act may have been the work of a few and the rights of other athletes from Chinese Taipei team, the WTF appointed Technical Delegate and the Competition Supervisory Board decided to only ban the player and the 2 coach involved and not the whole Chinese Taipei team from the remaining of the championship and make the following recommendation to the Asian Taekwondo Union:

* The Chinese Taipei player, coaches to be banned until their case is heard by the World Taekwondo Federation Ethics Committee.

* The Chinese Taipei Taekwondo Association and its officials to be investigated further by the WTF Ethics Committee and the proper punishment be handed down for the incident to stop any future attempts to manipulate the WTF Competition Rules & Regulations.

153 thoughts on “Shocking Act of Deception by Chinese Taipei”