A full day’s course followed by a two hour exam was attended by candidates who travelled from as far away as Scotland and Manchester to sit the course at the southern region training venue. Master Derek Sumner, chairman of UK Poomsae assisted Grand Master Shin in the delivery of the course which gave students the opportunity to become versed in the latest regulations and rules governing WTF poomsae. 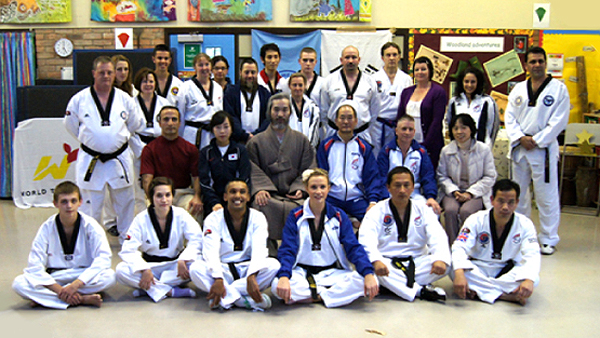 A further unexpected twist to the day excited students when Grand Master Kang Shin Chul (Technical director of Iran Tkd Association and Advisor of Asia TKD Union) and his family arrived at the close of the day. His Daughter, Master Yujin, (the 2008 Poomsae World Champion 1st Senior Female), very graciously gave a short display at the request of the students who were in awe of the performance which included koryo both forwards and backwards! In addition Master Kang unexpectedly gave a spontaneous short demonstration which highlighted his extreme control, speed, agility and flexibility.

Master Kang Shin Chul and his family were hosted by Livingwell’s Vice Chairman Ali Pourtaheri, UK Bronze Medallist 2010. All those who participated during the course welcomed the opportunity to ask questions of Grand Master Kang who went on to congratulate UK Poomsae for their notable improvement in recent years. 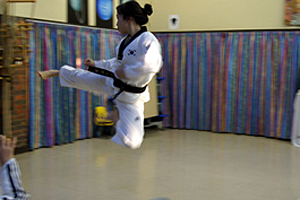 He made a particular point of highlighting this year’s achievement at the World Championships by Grand Master Shin who won gold in the new Masters Three Division. In the history of the World Championships this is the first introduction of a new division and the first gold medal to be awarded in this division will be recorded forever as a UK achievement and Master Kang said he was very proud to be in the UK at this time and share in this historical event. He made some well observed comments and gave some inspiring advice.

Many were left speechless at the unexpected and very gracious visit and were extremely grateful to have had the opportunity to meet Grand Master Kang in such informal circumstances. On the basis of this impromptu and informal visit it is hoped that a more formal visit can be arranged early next year for a much wider audience to have the opportunity of working with and benefitting from such a great experience delivered by such a great master.