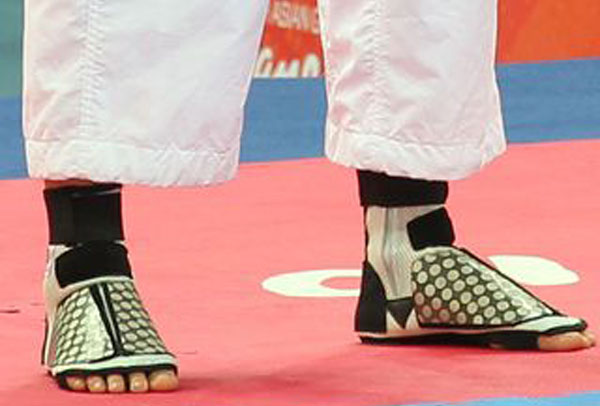 Budomart (Taiwan), which supplies electronic socks made by South Korea-based Lajust to Taiwan’s taekwondo team, said that according to the World Taekwondo Federation’s (WTF’s) website, both old and new models can be used at official taekwondo events until May 17, 2012.

After Taiwan’s Yang Shu-chun was disqualified from the Asian Games on Wednesday for using extra sensors in her electronic socks, some media reported that the old version of the socks had been banned from competitions since July.

The older version of the footgear has sensors that adhere to the surface of the sock while in the new version, the sensors are sewn into the sock.

Budomart stressed in its statement that the WTF has sent messages to its members saying that certified Lajust brand electronic socks, even if they are old models, can continue to be used.

It said the electronic socks made by Lajust have been certified by the Asian Taekwondo Union for use in all World Taekwondo Federation competitions, including the ongoing Asian Games.

On claims by WTF officials that Yang added electronic sensors to her heels, Budomart said the old model socks have an extra sensor pad on the heel, which can be seen in the instruction booklet provided with the footgear.

On Thursday, WTF Secretary-General Yang Jin-suk said at a press conference in Guangzhou that Lajust had never made a product with a sensor on the back of the shoe and accused Yang of trimming other pads to fit the heel location.

The manufacturer’s representative also said that out of 12 pairs of electronic socks supplied to Taiwan’s athletes, Yang and Huang Hsien-yung, who won a gold medal at the Asian Games, used the old models, while the other 10 used the new ones.