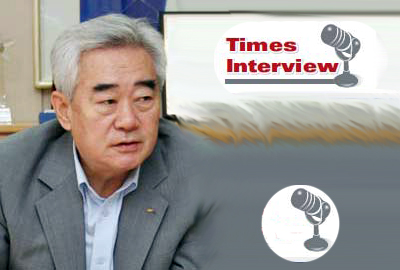 Toward that end, the World Taekwondo Federation (WTF) has been initiating a package of measures featuring the introduction of the instant video replay, revising competition rules and introducing a stricter accounting system.

All these and other efforts came with a 2013 IOC evaluation of taekwondo and other Olympic sports regarding their suitability as a continued part of the official program of the 2020 Olympics in mind. The national sport has been desperate to solidify its status as an Olympic sport in the face of challenges from similar martial arts such as karate, in particular.

WTF president Choue Chung-won has been raising the standard for all the reformative projects over the past six years since he took office in 2004, to great success.

Fresh from his recent visit to Beijing for the SportAccord Combat Games and Singapore for the inaugural Youth Olympics, Choue said taekwondo matches drew popularity with the adoption of the new scoring system, an instant video replay system, and a reduction of the competition area.

“We came with a new system via years of amendment procedures with the goal of making taekwondo more dynamic and exciting which proved to be highly effective during the Youth Olympics,” Choue told The Korea Times in an exclusive interview at his office.

Despite the challenges from the three sports, Choue seemed confident that taekwondo will outmaneuver them and remain as an official Olympic sport. He cited many international competitions that have adopted taekwondo as official events ― the 2013 Mediterranean Games, the 2017 Summer Universiade, and the World Masters Games.

“International Olympic Committee (IOC) President Jacques Rogge, together with IOC vice president Ng Ser Miang, concurrently president of the Singaporean Olympic Committee and some 50 high-ranking IOC and NOC members visited the taekwondo venue in Singapore held from Aug. 15 to 19 to applaud the enhanced dynamism and fairness of taekwondo matches,” he said.

Since Singaporean competitors snatched two bronze medals in the martial art for the first time in Olympic history, taekwondo came under spotlight with extensive coverage by the local mass media, according to Choue.

Come-from-behind victories will be possible to increase spectator appeal with the new scoring system so that players and fans can fully engage in the matches through to the end of the bout.

The reform program features the adoption of an instant video replay system which Choue said has significantly contributed to further enhancing fairness. “There was not a single protest about judges’ calls during the Youth Olympics and the SportAccord.”

Impressed by the enhanced fairness, some IOC members even expressed hope such a video replay system will be adopted in other international arenas such as World Cup football, for instance.

Various cases of misjudgment tainted the 2010 World Cup, triggering a dispute over the need for the video replay system to ensure fairness. But FIFA has remained mum on the growing call for reform.

The WTF is also turning its eye to projects seemingly more fundamental and proper to materialize the spirit of all sports – toward the promotion of world peace and charity.

“As a sound sport, taekwondo has traditionally injected the right mentality and discipline into youngsters mainly in less developed countries around the world. Many nations teach taekwondo as regular subject at elementary school. Numerous colleges in many countries like the United States, China, Turkey, Iran and Uzbekistan have adopted taekwondo as a regular subject,” Choue said.

The International Paralympics Committee (IPC) plans to host a review committee in December this year, to decide whether to include taekwondo in the list of 2016 Paralympics’ official program, as a crucial step for taekwondo ahead of the IOC’s planned evaluation of taekwondo for the official 2020 Olympic program. In this context, the WTF has already hosted the first and second World Para-Taekwondo Championships in Baku, Azerbaijan and St. Petersburg, Russia, in 2009 and 2010, respectively.

“We are laying further emphasis on less privileged people around the world including the physically disabled to give them hope and courage,” Choue said.

The envisioned completion of Taekwondo Park by the year 2013 in Muju, North Jeolla Province, will likely immensely help promote the spread of taekwondo throughout the world, he said.

He revealed his hope for more global businesses at home and abroad to have more interest in the global sport of taekwondo, with regard to further financial support to solidify its status in the official Olympic program.

(The article was carried in The Korea Times on September 9, 2010)