“We are giving out everything we can. So it will be our best performance of the world championships this year,” Ortega told “Dateline Philippines Sunday.”

She and Lagman said that they have been training with a Korean coach from Monday to Saturday, thrice a day.

Ortega added that they will try to defend their title while the men’s team will aim to surpass its bronze medal finish in 2008.

The World Taekwondo Poomsae Championships will take place from October 8 to 10 in Tashkent, Uzbekistan.

Poomsae involves the performance of choreographed movements of taekwondo punches, strikes, movements and kicks done individually, in pairs or in teams.

The sport is adjudged for presentation, accuracy, power, synchronicity (for pairs and teams), softness and overall presentation.

The Republic of the Philippines Team, composed of sparring and poomsae jins, hauled 7 gold medals.

Although Lagman and Ortega admitted that Korea remains on top of the sport, they cited that the Philippines is the world’s No. 6 in poomsae this year. Korea is trailed by Iran, Spain, Vietnam and Turkey.

“There are more people getting into taekwondo and going into poomsae,” Ortega commented.

Although poomsae is not yet an Olympic event, it is already included in the Southeast Asian (SEA) Games. It will also be part of the 2014 Asian Games.

“It’s gonna be one step at a time,” added Ortega. 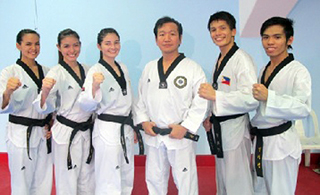 The country’s international success in poomsae came as a surprise most especially to Lagman, who revealed that she was an “accidental” poomsae athlete.

“I didn’t really like taekwondo. I liked volleyball,” she said. She got into taekwondo as a 13-year-old but joined poomsae in 2008 because of her cousins’ influence.

She and her cousin then talked about the long road towards achieving the gold.

“It’s hard to win a medal. You just have to believe in yourself. You should strive hard to get to what you want, what you want to achieve, to pursue the gold medal because for us, actually we have a goal palagi. Talagang gold medal,” she said.

“There’s a journey that you undergo so much hardships, sacrifices to get to that goal that you want,” added Ortega, who got into taekwondo when she was 10.

She said that more than just learning the skills behind the sport, taekwondo has taught her how to be obedient, confident and disciplined.

“Being into sports is one way that makes Filipinos be proud of themselves. It’s one aspect we excel in,” stated Ortega. “It’s something that will make Filipinos and the Philippines proud.”