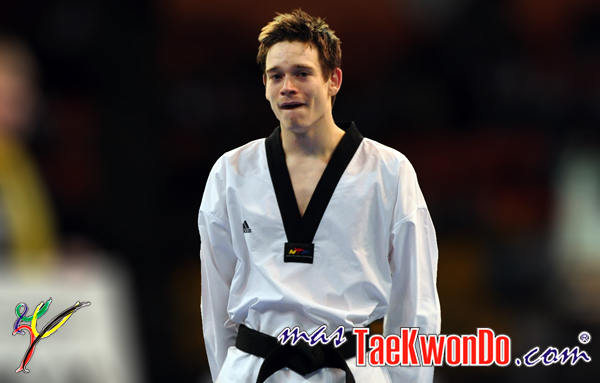 Cook, the world junior champion who was fourth at the Beijing Olympics, beat current World Cup champion Abdollahi Farzad of Iran 9-7 in the -80kg final.

Cook confessed he was nervous in front of the home crowd on the first day of competition in Manchester.

His latest victory comes at the end of an impressive year for the teenager who upon winning the European senior and European youth titles gained world number one status in the -80kg category.

“Winning European and British titles is great, but it means nothing compared to an Olympic medal. That’s what I want and that’s what it’s all about,” said the Dorchester man.

“Next year’s world championships will be a test and that’s what my focus will be on in the coming months, but after that, it’s all about London.”

On a day of impressive performances, Tony Grisman in the men’s under 68kg category perhaps even outshone Cook.

Grisman was trailing throughout much of the three rounds against the world champion Mohammad Baghheri Motamed of Iran, but managed to level in the third round.

That forced an extra-time golden point round.

Motamed twice struck and looked to have won the encounter, but neither kick registered as a point and it was Grisman’s punch which proved decisive.

Grisman hailed the win as the greatest of his career, although it was greeted with a mixture of applause from the predominantly partisan crowd and booing from some of the visitors.

“Some of the crowd and my opponents didn’t like the fact that I was using the punch to score points, as it’s obviously not a proper kick,” said Grisman.

“However, you have to use what you can, that worked for me today.”

Bianca Walkden was the other Brit to claim a title on the first day of competition in Manchester.

The Liverpudlian was taking on Nadin Dawni of Jordan in the women’s +73Kg category and after two close rounds fought her way clear in the third to take the match 10-7.

It was her third successive British title and follows success in the World Martial Arts Championships in Beijing in September.

“I knew I was in good form heading into the tournament, but every year the competition gets stronger here and you never know how you’ll perform on the day,” she said.

Among the highlights on day two of the British International Championships on Sunday will be Youth Olympic gold medallist Jade Jones in her first competition since the Singapore Games.