It is the first time that Daedo TK-STRIKE is introduced to the Korean Taekwondo people since it became recognized by the WTF on February 2nd 2010. There was a demonstration event in front of referees during the 3.15 competition in Masan (Kyung-Nam) but it was never used in a competition before.

At the demonstration event it was said that there is no perfect system but Daedo TK-STRIKE is a step ahead of the LaJust system. 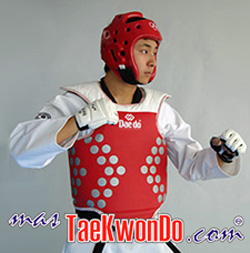 Mr. Jin Bang Yang, Secretary General of K.T.A., explained to masTaekwondo.com the reasons for choosing Daedo: “Korea Open is a WTF Recognized competition so we had to choose between the only two WTF Recognized systems, Lajust and Daedo. Since LaJust has been used in several competitions in Korea, we found it necessary to try DAEDO’s system which is not so well-known in Korea.”

Korean Taekwondoists, who have only used LaJust or KP&P, have great expectations regarding Daedo, which is becoming very well-known globally, in various countries and continents. After the Korea Open, Daedo will be able to reaffirm its category within the electronic protectors market.

The 2010 Korea Open will be held from the 2nd till the 6th of September at Park Jeong Hee Stadium in Kyung-Sang Bukdo Gumi City.