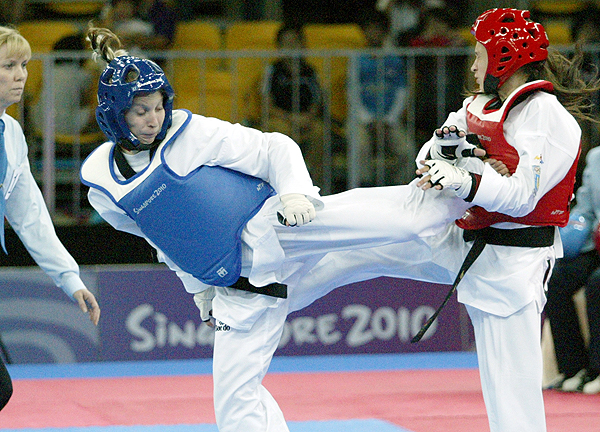 In the women’s -44kg weight division, Russia’s Anastasia Valueva outpointed Ukraine’s Iryna Romoldanova 7-1 in the final match to win the gold medal. The bronze medal went to Seymar Tuncer of Turkey and Tajikistan’s Shukrona Sharifova. Ms. Sharifova, who earned a wild-card ticket to the taekwondo competition, made a 3-1 upset victory over China’s Li Zhaoyi, the bronze medalist at the WTF World Taekwondo Qualification Tournament for the Youth Olympic Games, in the opening match.

The taekwondo competition took place on the fouth floor of the International Convention Center in downtown Singapore.

In the men’s -48kg weight category, Israel’s Gili Haimovitz won the gold medal as his final-match opponent, Mohammad Soleimani Delgarm of Iran, withdrew from the final match. The United States’ Gregory English and Lucas Guzman of Argentina shared the bronze medal in the same category. 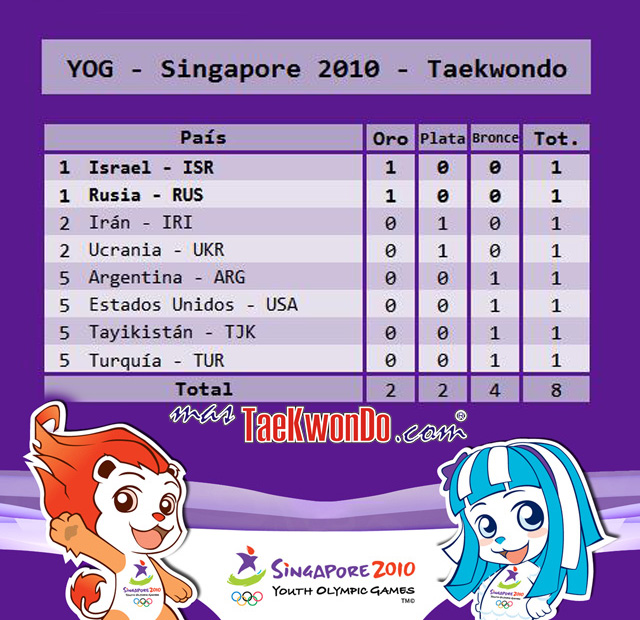 The taekwondo competition of the 1st Youth Olympic Games, which runs through Aug. 19, attracted a total of 99 young athletes, aged between 16 and 17, from 66 countries.

Of the 99 athletes, 59 athletes, 29 male and 30 female, earned the tickets to the taekwondo competition through the WTF World Taekwondo Qualification Tournament for the Youth Olympic Games. Host Singapore received two male and two female tickets, while 36 athletes, including 19 females, participate in the taekwondo event through the NOC universality places, better known as ‘wild cards.’

Four cameras for instant video replay were installed at the competition court, with no protests related to refereeing and judging.

Between the semifinal and final matches, there was a 15-minute taekwondo demonstration by the WTF Taekwondo Presentation Team for the taekwondo spectators, drawing big applause from the jam-packed spectators.

Reflecting the high popularity of taekwondo, all tickets were sold out for the five-day taekwondo competitions.

In the afternoon, there were two one-hour taekwondo demonstrations and training for taekwondo techniques by the WTF taekwondo team for Youth Olympic Games athletes and spectators..

One thought on “Russia, Israel Win 1 Gold Medal on 1st Day of Taekwondo Competition at YOG”