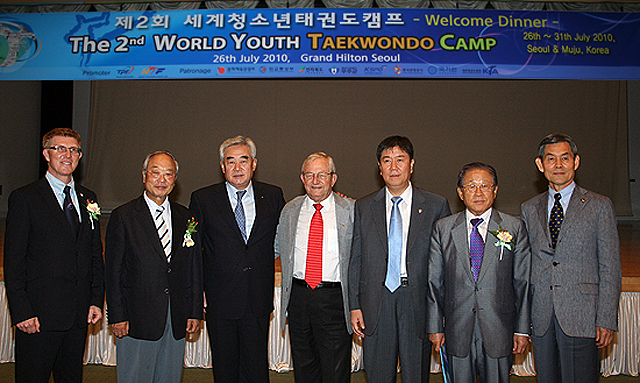 The annual camp, jointly organized by the World Takwondo Federation and the Taekwondo Promotion Foundation, will last until July 31. The camp drew 272 young taekwondo athletes and officials from 25 countries.

The six-day camp started with the opening ceremony in Seoul on July 26 and then moved to Muju, North Jeolla Province on July 27 for various programs for the participating athletes. On July 30, the athletes will move up to Seoul.

The opening ceremony of the camp was held at the Grand Hilton Hotel in western Seoul on July 26, with the attendance of such VIPs as Mr. Phillip Coles, a member of the International Olympic Committee from Australia and WTF vice president; Mr. Dae-ki Kim, 2nd vice minister of culture, sports and tourism; and Grandmaster Won-sik Kang, new president of the Kukkiwon.

At the opening ceremony, Mr. Dai-soon Lee, chairman of the Taekwondo Promotion Foundation and vice president of the WTF, and WTF President Chungwon Choue delivered their respective welcoming speech for the participants.

To commemorate the 2nd World Youth Taekwondo Camp, IOC President Jacques Rogge sent a congratulatory message, which was read for the participants.

“Welcome to the 2nd edition of the World Youth Taekwondo Camp. For a week in Seoul and Muju, you will be experiencing a unique atmosphere just like the champions you watch on television. You will have the opportunity not only to make progress in your sport every day through training courses, but also to meet some Olympic champions who will share with you their experiences and even their techniques, the message read.

Maybe we will see some of you on the international sporting stage. Perhaps some of you will become tomorrow’s Olympic athletes in London in 2012 or in Rio de Janeiro in 2016 or beyond,”IOC President Rogge said. “This Camp will also help you learn about the Olympic values, discover other cultures and share friendships with young people from all around the world. I would like to thank the World Taekwondo Federation and the Takwondo Promotion Foundation for organizing such a commendable camp for the second year.”

TPF Chairman Lee said in his welcoming speech, “This camp will serve as a scene of festivity where you can put into practice taekwondo and Olympic spirits of paying respect to, and having concern for, your opponents.”“Finally, we also hope that you can enhance friendships through cultural exchange with others from all across the globe.”

Mr. Lee continued to say, “Throughout the camp, I expect you to act upon the Taekwondo Practitioner’s Creed, established in the 2009 WTF Olympic Values Education Program Forum.”“Carrying on the spirit of the Five Commandments of Hwarang, the guiding ethos for Korean youths in the Silla era of 1,500 years ago, the Taekwondo Practitioner’s Creed reads as follows: First, build myself both physically and mentally to lead a righteous life. Second, be devoted to my parents and love my family. Third, respect teachers and elders and stay loyal to my friends. Fourth, serve the local community and demonstrate my allegiance to my country. Fifth, preserve nature and contribute to the peace and prosperity of mankind.” 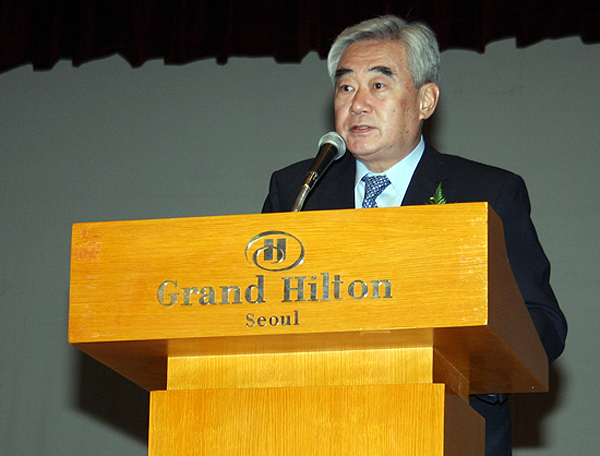 WTF President Choue said in his welcoming speech, “The key objectives of the camp are to provide the youth of the world with high-level training and education on taekwondo skills and its philosophy and spirit. All of this will help them lead a healthy life, physically and spiritually.”

“The World Taekwondo Federation hopes to offer more opportunities to all of the youth of the world. To accomplish this, we launched the Taekwondo Peace Corps in 2008 and the World Youth Taekwondo Camp in 2009,” WTF President Choue said.“These programs give hopes and dreams. They offer the promise of opportunity and a chance for pursuit of a brighter future.”

“Not too long ago, Dr. Jacques Rogge, president of the International Olympic Committee, attended the opening ceremony of the Olympic Youth Development Center in Zambia,” Mr. Coles said.

“During his address at the event, President Rogge said as follows: Sport strengthens the body and the mind, integrates people into society and teaches respect for rules. It brings hope, it brings a dream, and it brings joy. And for the nation, it allows for identification and lots of pride,” Mr. Coles told the young taekwondo athletes.

“There is a lot of power behind President Rogge’s words. They are at the heart of what the Olympic Movement is about. These very ideals are why the Youth Olympic Games were created. We want to share hopes, dreams and joy. We want to give pride and identification to every citizen of every nation,” the IOC member said. “To the athletes: I hope that you precious young people have a joyful learning experience to take home with you that you will never forget.”

“Especially, the start of the full-scale Taekwondo Park construction where the World Youth Taekwondo Camp will be held from 2013, adds a special meaning to this year’s event and I hope this taekwondo fiesta would lay ground work for true taekwondo globalization,” Mr. Kim said.

New Kukkiwon President also delivered a message, in which he said, “Through the camp programs, express your hidden passions and experience multi-culture with taekwondo friends from various nations. Open and develop yourself to the global cultures and find yourself growing to the excellent taekwondo.” 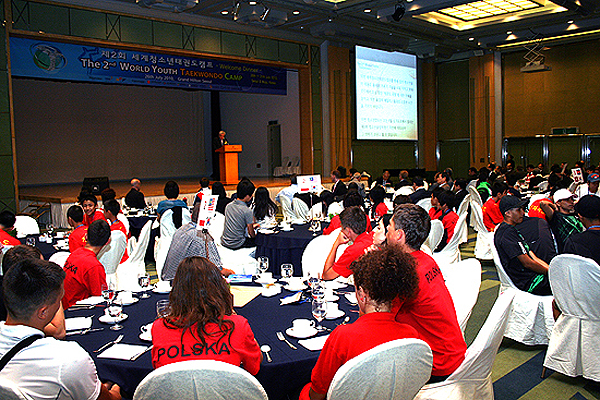 On July 27, the camp participants moved to Muju to attend special lectures and taekwondo training sessions.