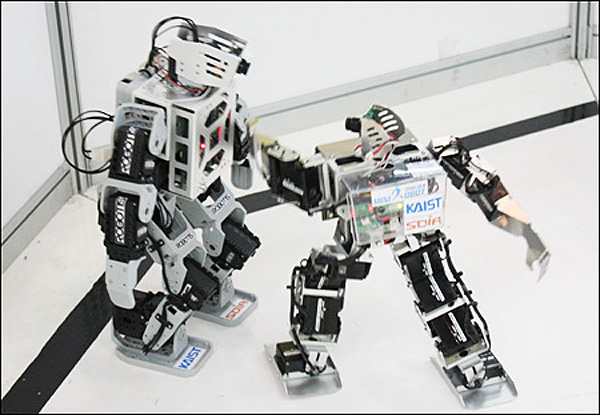 The Ministry of Knowledge Economy (MKE) said Monday that scores of teams would take part in the competition of “Taekwondo Robots” at the International Robot Contest in KINTEX, Gyeonggi Province slated for this October.

“The robots will respond with programmed moves according to what their sensors detect ― in effect being semi-autonomous. In other words, they would fight each other based on their embedded sensors, which help predict assaults and attacks by its opponents” an MKE official said. 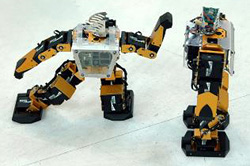 “We hope that the competition will further boost the popularity of taekwondo. This year, the event is expected to invite mostly local amateur scientists. But over the long haul, overseas participants will join to drum up support for taekwondo”.

Korea Advanced Institute of Science and Technology (KAIST) researcher Roh Sung-su, who oversees the taekwondo robot segment, said that the games would be like the actual sparring between human practitioners.

“The rules for robotic taekwondo bouts will be similar to those of real matches. A game is composed of three rounds lasting nine minutes with three referees to oversee the bout”, Roh said.

“The one garnering the highest points will chalk up a win. As far as the techniques are concerned, they are not exactly like humans practicing taekwondo from the beginning. Yet, they will improve as time goes by”.
.

In addition to the taekwondo robots, the October festival will include nine competitions involving humanoids, robotic football matches, rovers and a variety of combat machines.

“Around 4,000 teams are predicted to be part of the annual event, which kicked off back in 2006. In order to make it a genuinely global event, we plan to invite 40 teams from 10 countries this fall”, the MKE official said.