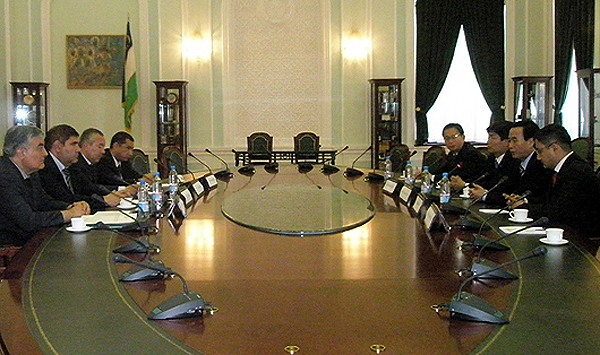 In a meeting with a WTF inspection team led by WTF Deputy Secretary General Manseek Choe on June 8, Mr. Botir Rakhmatovich Parpiev, president of the Uzbekistan Taekwondo Association and chairman of the State Tax Committee of the Republic of Uzbekistan, expressed his appreciation to the WTF for the opportunity to host the World Taekwondo Poomsae Championships in his country.

He also assured that the members of the Organizing Committee of the Championships are mostly composed of high-ranking government officials to deliver the most successful championships.

According to Mr. Parpiev, the order of the Cabinet of the minister of the Republic of Uzbekistan, which specifies the roles and responsibilities of each ministry for the organization of the championships, was passed and approved under the initiative of the prime minister.

Mr. Abdulla Nigmatovich Aripov, deputy prime minister and chairman of the Organizing Committee, also committed to delivering the most successful organization of the event.

The 5th edition of the WTF World Taekwondo Poomsae Championships, which have been taking place every year since its inauguration in 2006, will take place at the Universal Sports Palace Uzbekistan in Tashkent.

According to the officials of the Organizing Committee, the championships will mark the biggest international sporting event ever in the history of Uzbekistan.

The Uzbekistan Taekwondo Association was formed in 1993 with only 500 athletes mostly in Tashkent. The population of taekwondo practitioners has now increased to more than 20,000. Uzbekistan won two silver medals and four bronze medals at the recently finished 19th Asian Taekwondo Championships in Astana, Kazakhstan.
.
.
.
Source: WTF.
.
masTaekwondo Team
en.masTaekwondo.com
info@mastaekwondo.com