“The Sport Peace Corps entails provisions of comprehensive sport-related assistance to not only underdeveloped countries, but any U.N.-assigned areas,” WTF President Choue said in his presentation on the second day of the two-day forum at the Olympic Museum Auditorium of the IOC Headquarters.

The forum participants adopted 10 resolutions, in which they especially commended the “achievements of the WTF in its successful outreach to young people and its aims of building a better and more peaceful world; and to advocate the consideration of its global expansion, in close cooperation with key stakeholders, including the IOC, the UN, national and international sports federations and NOCs, firmly believing that together, we have the ability to promote global peace and harmony through sport.”

Under the topic “Sports Diplomacy: The WTF Experience,” WTF President Choue told the forum participants, “the assistance includes providing equipment, and skills and training for local athletes and coaches for any Olympic sport in countries in need.”“This gives hopes and dreams to the young people who are deprived of the opportunity to learn while promoting friendship, peace and understanding through sport and interpersonal interactions.”

“All of these efforts will be done at the same time as sharing the Olympic spirit and the United Nations’ aspirations for peace,” he continued.

“I am encouraged by the initiation of this program, and I know that it can be expanded by collaborative efforts between the United Nations and the IOC,” Dr. Choue said. “I have shared the successes of the pilot WTF Taekwondo Peace Corps, and my vision of a Sport Peace Corps both with IOC President Rogge and U.N. Secretary General Ban Ki-Moon. As steps by both organizations move toward such cooperative work, I can see my vision becoming a reality.”

He continued, “The world needs help and hope. They need pride and a sense of integrity. It is true that clothes are needed. Houses, food, and money are needed. But more than anything else, the world needs dreams to dream and goals to reach for. Taekwondo and the WTF are doing their parts to bring these dreams. But more can be done. The United Nations and the IOC together with International Federations can build a coalition, a Sport Peace Corps to deliver all of these things.” 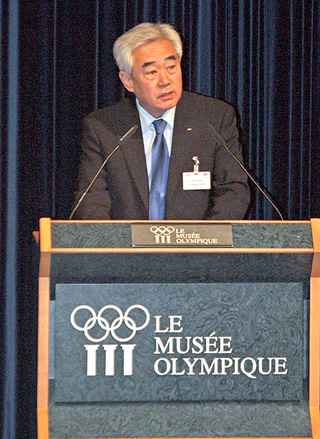 Dr. Choue was the first IF head to make a presentation at the U.N.-IOC Forum.

WTF President Choue started his speech by saying, “The weight of sport as a catalyst for peace and harmony can never be underestimated. Sport has the power to bring people together, bridge difference, and promote communication and understanding.”

“The goal of Olympism is to place sport at the service of the harmonious development of man, with a view to promoting a peaceful and better world,” he continued. “The IOC is assigned this mission to promote this Olympic ideal throughout the world and lead the Olympic Movement with the concerted, organized, universal and permanent action inspired by the Olympic values.”

“One effective way to do so is utilizing its network of relations with the sport-related institutions, such as National Olympic Committees, International Federations, NGOs, and the sports industry, and the U.N. organizations,” Dr. Choue said. “Considering that the U.N. and the IOC share common ground in their ultimate goals, together they have the ability to dramatically promote peace and harmony throughout the world by means of sport.”

He said, “The WTF is a model of this as members of our very own Council from Israel and Iran believe in putting aside political differences and sitting together in friendship and respect under the name of sport, and work toward a goal of peace and hope.”“These beliefs are the driving forces behind my vision of a project of peace and development charged by the world of sport.”

“Inspired by John F. Kennedy’s U.S. Peace Corps, I envisioned a Sport Peace Corps, in which each sport of the world dispatched teams to deliver to them dreams as a source of strength, peace as a path to follow, and the Olympic spirit to serve as a guide,” Dr. Choue said.
. 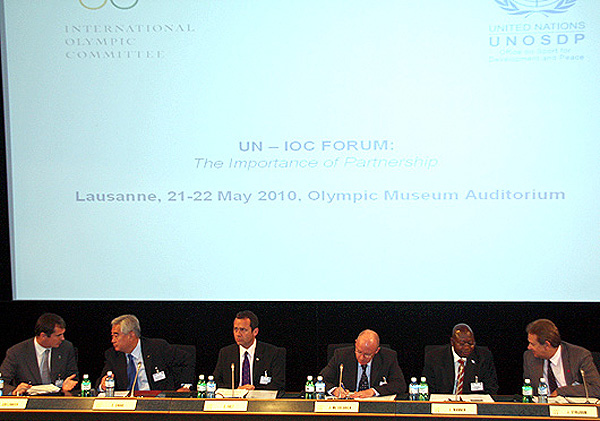 WTF President Choue first unveiled his dream of a Sport Peace Corps in 2007 at an international workshop on sports and peace in Leuven, Belgium, and in Monte Carlo, Monaco at an international Peace and Sport forum in December 2007. He continued his call for a Sport Peace Corps in 2008 at the 6th IOC World Forum on Sport, Education and Culture in Busan, Korea.

As of this past winter, a total of 207 members of the Taekwondo Peace Corps were dispatched to 35 different countries around the world to teach culture and virtues of taekwondo. Each team has been comprised of four competent taekwondo university students, three taekwondo masters who are qualified for taekwondo education, and one person who has proficient language skills to serve as an interpreter. Educational packages including training booklets, CDs, uniforms, and other equipment were sent along with them to each region they were dispatched.

“The WTF member national associations in each respective country offered supplementary assistance including accommodation and transportation,” WTF President Choue said in his presentation. “For the most underdeveloped of countries, the WTF Taekwondo Peace Corps and its contributors pay for all expenses necessary for service.”

“These pilot years have allowed us to expand our horizons with this project. The Taekwondo Peace Corps will continue with a twice-a-year, short-term dispatch for two months, and a long-term dispatch of instructors for six months to two years, targeting more recipients and a larger number of countries,” Dr. Choue said.

“The project will be expanded worldwide, based in as many countries as possible and incorporating qualified taekwondo instructors of different nationalities. The expansion will be founded on a close consultation with the 191 WTF member national associations around the globe.”

“The successes have been many and put forth an example for International Federations, the IOC and the U.S. the endless possibilities for a full-fledged Sport Peace Corps,” WTF President Choue said. “Based on our experience, I propose moving forward in developing the Sport Peace Corps program to expand the initiative globally. I call on all International Federations, the IOC and U.N. institutions, as well as all networks of relations and sponsors to band together in making this a reality.”
.