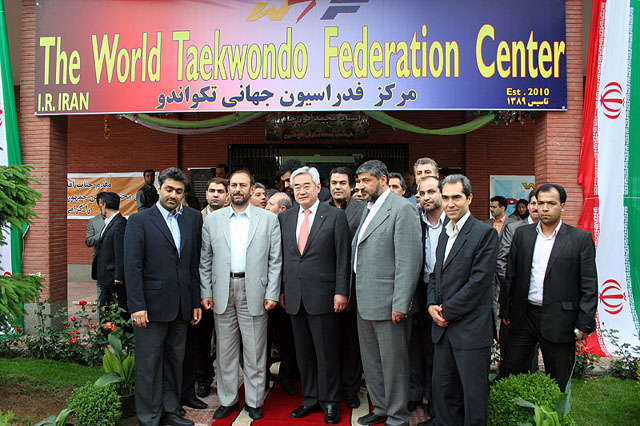 WTF President  Chungwon Choue poses with Seyed Ali Saeedlou (second from left at front row),  vice president and head of the Physical Education Organization of Iran; and  Seyed Mohammad Pouladgar , president of the Taekwondo  Federation of the Islamic Republic of Iran, after an opening ceremony of the  WTF Training Center in Tehran, Iran on April 29, 2010.

A taekwondo training center designated by the World Taekwondo Federation (WTF) opened in a ceremony in Tehran, Iran on April 29, 2010.

The opening ceremony of the WTF Training Center drew such dignitaries as Seyed Ali Saeedlou, vice president and head of the Physical Education Organization of Iran; and WTF President Chungwon Choue.

Also attending the ceremony was Seyed Mohammad Pouladgar, president of the Taekwondo Federation of the Islamic Republic of Iran; and Mr. Hadi of Iran, the double gold medalist in the taekwondo competition at the Olympic Games.
. 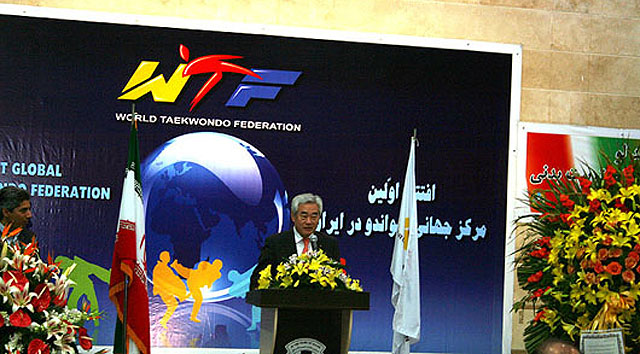 During the opening ceremony, WTF President Choue delivered a WTF honorary 7th Dan certificate and a black belt and taekwondo uniform to Seyed Saeedlou, drawing a big applause from the participants.

“The WTF Training Center in Tehran will serve as a good facility for further promotion of taekwondo not only in Iran, but also in the Middle East Asian region overall,” WTF President Choue said during the opening ceremony.

Iran, one of the world’s taekwondo powerhouses, boasts of its overall taekwondo population of about 2 million. It has about 4,000 taekwondo gyms around the country. The population of taekwondo in Iran is rapidly increasing with the growing participation of women practitioners. For the first time in its history, Iran dispatched its female taekwondo athletes to an international sporting event in 2005.

The Iranian taekwondo federation plans to launch a taekwondo demonstration team as early as the end of 2010, while pushing ahead with a family taekwondo competition.
.
.
.
By WTF.
.
masTaekwondo Team
en.masTaekwondo.com
info@mastaekwondo.com