Azerbaijan won one gold, four silver and three bronze medals for the overall men’s title at the 2nd WTF World Para-Taekwondo Championships in St. Petersburg, Russia on May 10, 2010.

A total of 65 athletes from 21 countries on the five continents competed in the 2nd WTF World Para-Taekwondo Championships, which took place at the Yubileyny Sports Complex in downtown St. Petersburg. The one-day event featured eight male and two female categories.

The 1st WTF World Para-Taekwondo Championships was held in Baku, Azerbaijan on June 10, 2009, drawing a total of 36 athletes and 18 officials from 16 countries.

Prior to the semifinal matches, there was an opening ceremony of the 2nd World Para-Taekwondo Championships. The ceremony drew high-ranking sports figures, including Mr. Ivan Dibos, an IOC member of Peru and vice president of the WTF; Mr. Pavel Novikov, deputy minister of sport, tourism and youth policy of the Russian Federation; and Mr. Anatoly K. Terekhov, president of the Russian Taekwondo Union. 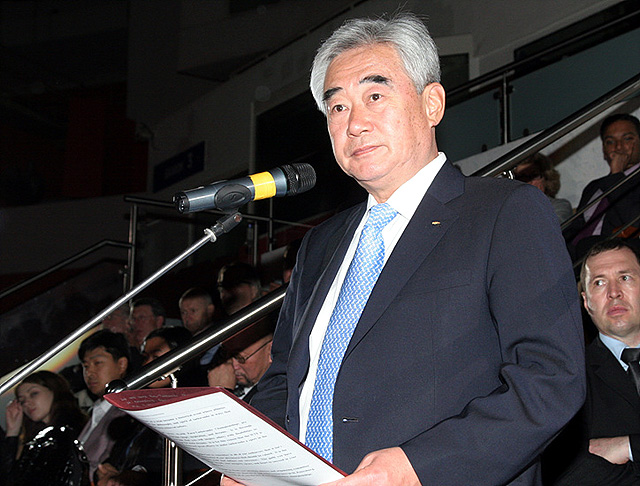 In his opening speech, WTF President Chungwon Choue said, “From the beginning of humankind, as a species we have faced challenges head-on. We have found that any goal can be met if a desire is held in our hearts.” “Today, we gather to celebrate the enduring will of the humanity to rise up and accomplish greatness.”

“The power and practice of taekwondo is bound by no limits: not by age, gender, race, religion, nationality, nor physicality. It gives strength to the soul to overcome any obstacle,” Choue said.

He continued to say, “Last year, we were all inspired by our first-ever WTF World Para-Taekwondo Championships in Baku, Azerbaijan.” “What began as a trial became a historical event where athletes displayed the philosophy and spirit of taekwondo in ways that had never been achieved before.”

“The 2nd WTF World Para-Taekwondo Championships are about courage, hope, inspiration and dreams. It is through your courage that you will inspire others with disabilities to have hope for their dreams,” Choue said. “It is for this reason that the WTF is putting forward great efforts to make taekwondo a sport in the Paralympics.”

He said, “It is important to remember in all of our endeavors that it isn’t the destination of our adventures that should be valued. It is the journey itself that defines our successes.” “The path you have taken reveals your integrity, grace and heart to succeed in your endeavor.”
.
.