The 2010 Francophone World Cup took place in Cotonou, Benin on May 2, 2010, drawing more than 100 taekwondo athletes from 23 French-speaking countries.

The Francophone World Cup, the seventh edition of its kind, took place at the Palais des Sports in Cotonou. The inaugural Francophone World Cup dates back to 2002 in Paris, France. The 2nd edition was held in Rabat, Morocco in 2003; with the 3rd and 4th event in Tunis, Tunisia, and Niamey, Niger in 2005 and 2007, respectively. The fifth one took place in Libreville, Gabon in 2008 and the 6th edition in Lille, France in 2009.

Also attending the event were nine other presidents of the WTF’s French-speaking member national associations. They were from Benin, Niger, Cote d’Ivoire, Mali, Tunisia, Gabon, Belgium, Guinea, the Congo Republic.

The Francophone World Cup was immediately followed by the 4th Challenge Espoirs on May 3 at the same venue.

An opening ceremony of the Francophone World Cup took place at 4 p.m. on May 2, with the attendance of Mr. Etienne Kossi, sport and youth minister of Benin.

In his congratulatory speech, WTF President Choue said, “The Francophone World Cup is a unique event that displays the versatility of our sport that is available to all who want to participate.”

“While a common language brings those countries and athletes here, it is taekwondo that binds us all together,” Choue said. “This sport is bound by no limits of race, gender, nationality, religion, or physicality.”

“As we have embarked upon each new step of our sport, we have seen a dramatic rise in participation by member countries of the African Taekwondo Union. The WTF has always sought to support and encourage this,” Choue said.

In his speech during the opening ceremony, Mr. Piarulli, president of the UMFT, spoke well of WTF President Choue’s great achievements over the last several years. “We fully support WTF President Choue, whose strong leadership helped taekwondo be put on the official program of the 2012 and 2016 Olympic Games.”

On May 1, there was the General Assembly of the UMTF, in which the participants decided to hold the next Francophone World Cup in Abidjan, Cote d’Ivoire in 2011.
.
Full Results
.
.
.
By WTF.
.
masTaekwondo Team
en.masTaekwondo.com
info@mastaekwondo.com 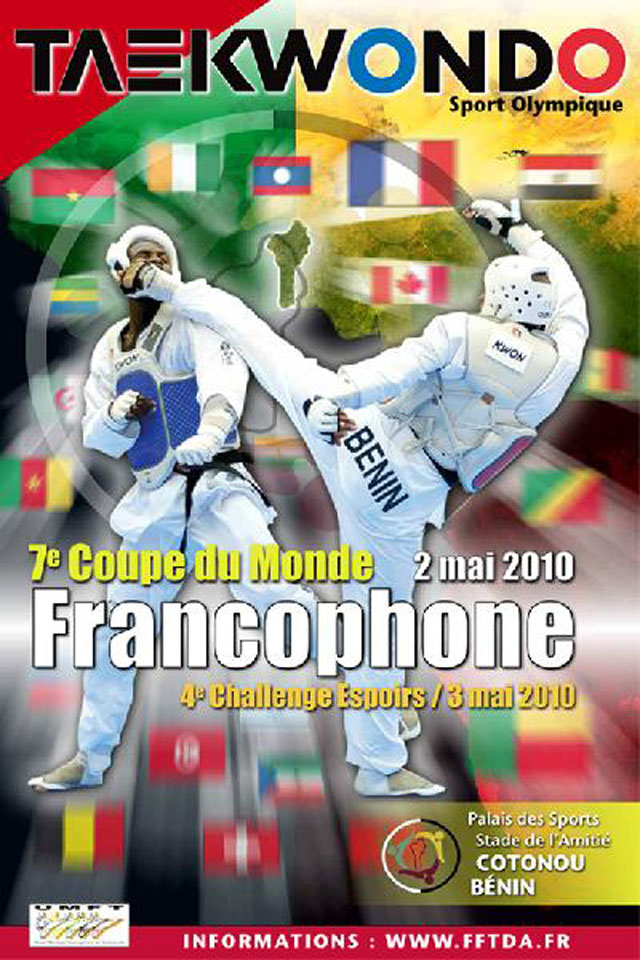