The “verde-amarelhas” (green and yellow boys and girls) arrived last night to Tijuana, where they were received by the Baja California Sports and Physical Culture Institute General Director, Saul Castro Verdugo who welcomed the team guided by head coach Fabio Goulart.

“We hope you enjoy your stay here, you are very welcome”, said Castro Verdugo. “We have had a very good experience with some other Brazilian delegations in other tournaments and special events such as the Volleyball World Championships and also the Pan-American Cups”.

The Amazonian team expects to have a good training camp before starting its participation. Brazil and Mexico held a joint practice a day after the arrival of the team from South America. “Our objective is to qualify on the Pre-Olympic round, and to win one medal at least in the Championship”, said Goulart.

A total of 17 competitors were reported by the delegation at the moment of the arrival to Baja California’s High Performance Center. Eleven of those 17 competitors will fight the World Junior Championship while the other six will look for their ticket to Singapore YOG. 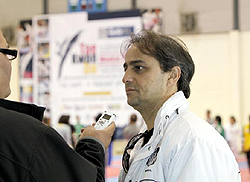 “We have boys and girls whose ages are between 15 and 17 years old, they are part of a new formation process followed by our confederation, that started to support our programs with the purpose of improve our level in a medium and long term”, Goulart added.

This is a very important step for the Brazilian taekwondo Olympic and high competition programs, due to the high expectations after Rio de Janeiro granted the privilege of being chosen as the Host City of the Games in 2016.

“We have a medal winner (Natalia Falavigna, bronze in Beijing 2008) and We expect to increase the number of people on the podium in future events, our level is not as high as Mexico’s at this time, but fortunately we have the support since the last and a half year in participation with more resources”.

The Brazilians spent their first night at Baja California’s High Performance Olympic Center, where they share part of the Athletic Lodging Village with Mexico’s National Junior Team. Both of those delegations have also shared the practice area inside the Multipurpose Gym, which will become an arena specially designed to host the Olympic qualifying rounds and also the Championships by the beginning of March.